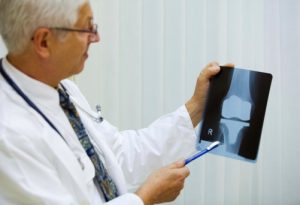 The DePuy Attune (a knee arthroplasty system) promises a speedy recovery, natural movement, and stability for patients in need of a knee replacement. The product was engineered and placed on the market in 2011 by DePuy Synthes, a subsidiary of Johnson & Johnson.

The DePuy Attune is implanted through surgery, in which the surgeon replaces the damaged bone and uses cement to hold the device in place.

This device has seen a high rate of failure, prompting hundreds of lawsuits against DePuy Synthes. The first lawsuits began in September 2017 and several more have been filed since then.

One factor of DePuy Attune failure that has caught the attention of researchers is tibial loosening. This occurs when a component of the device (either a metal plate or cement) connected to the lower leg bone starts to loosen, resulting in instability, dislocation, and possibly fractures of surrounding bone tissue.

According to a 2017 MAUDE database study, more than 230 cases of DePuy Attune failure among patients who underwent the knee replacement were reported to the US Food and Drug Administration (FDA).

Using the MAUDE database, researchers were able to find 21 reports of tibial loosening at the implant-cement interface that occurred within a two-month period. However, this didn't account for other factors that led to tibial failures. In addition, the MAUDE database may not have reported all cases of tibial loosening. This means that the incident rate could be much higher.

The most common factor in tibial loosening was failure of the cement to bond the device components to the bone. Signs of a DePuy Attune failure include:

The knee moving backwards or sideways

Instability of the knee, especially when weight is applied

Pain in the knee

Loss of range of motion

Swelling or inflammation of the knee

A warm feeling that occurs months after surgery

If you have begun to experience any of these symptoms, it's urgent to seek medical attention as soon as possible. Your doctor may perform an X-ray, bone scan, or ultrasound to determine where the damage occurred. If your symptoms were caused by tibial loosening, you may be required to undergo another bout of surgery.

Your legal recourse in the event of a DePuy Attune failure

A failed medical device can be a confusing and frustrating ordeal that can result in further complications. Undergoing revision surgery will not only require more time away from work and engaging in everyday activities, it will be costly. If your DePuy Attune failed to do what it was designed for, you shouldn't have to pay for someone else's error out of your own pocket. That's why it's critical to understand your legal options.

The joint replacement attorneys at Burns, Bryant, Cox, Rockefeller & Durkin, P.A. want to sit down with you and discuss your matter. We’re dedicated to helping injury victims like you pursue justice and maximize the compensation you’re entitled to. This includes accrued medical expenses, lost wages, and additional suffering.

Don’t hesitate. Contact us today for a no obligation consultation.