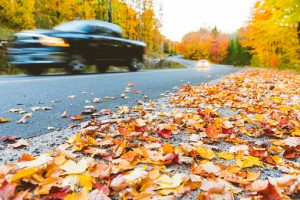 Autumn in New Hampshire might be one of the most beautiful seasons of the year. But it’s also, unfortunately, one of the deadliest times of the year for drivers nationwide. According to statistics compiled by Statista from 2016, the most recent year, October had the most traffic fatalities by month, with a total of 3,249 nationwide. November saw a significant drop (2,998 fatalities), but the numbers were still relatively high.

What’s the reason why? Researchers have a few theories. And they involve shorter days, longer nights and a lot of slippery, wet leaves.

According to the National Safety Council (NSC), the risk of traffic accidents can increase as the days get shorter. Visibility is limited to 250 feet without high beams and 500 feet with high beams. This gives drivers less time to take evasive measures, especially if they are speeding or distracted. Additionally, a 50-year-old motorist may need double the amount of light that a 30-year-old motorist does.

The shorter days also increase the risk of drowsy driving. A poll conducted by the National Sleep Foundation found that 60 percent of motorists have driven while drowsy. Another 37 percent of motorist have fallen asleep at the wheel.

According to an article by Inverse, an increase in nighttime hours can affect the circadian rhythm, the body’s internal clock that programs how sleepy or alert we are. During the dark hours, a hormone called melatonin is released, increasing the risk of falling asleep at the wheel.

During the month of November, roadways can become slippery. This is often attributed to:

The changes brought about by autumn are never an excuse for negligent driving. Auto accidents during this time of year are often caused when drivers fail to pay attention and adjust to hazardous road conditions.

If you or a loved one was injured in a crash, you need an experienced attorney on your side. Contact Burns, Bryant, Cox, Rockefeller & Durkin, P.A. today for a free consultation.