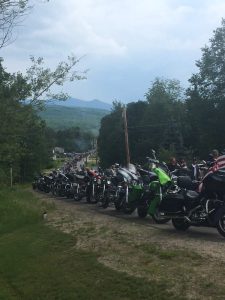 One of the most tragic and devastating crashes on U.S roads so far this year recently happened in New Hampshire when seven motorcyclists lost their lives after being struck by a man driving a commercial pickup truck, according to NBC News.

The truck, which was towing a flatbed trailer and traveling westbound, collided with 10 motorcyclists traveling eastbound in Randolph. The driver, a Massachusetts resident, was reportedly driving erratically and crossed the double-yellow centerline at the time of the crash.

At the time of the crash, the driver was working for Westfield Transport, based in Springfield, Massachusetts. He was charged with seven counts of negligent homicide and will face charges in New Hampshire.

The victims of the crash were members of the Jarheads Motorcycle Club – comprised of those who served in the Marines and their spouses. The JarHeads president described the horrific details of the crash:

"He turned hard left into us and took out pretty much everyone behind me. The truck and trailer stayed attached and that is why it was so devastating ... because the trailer was attached and it was such a big trailer, it was like a whip. It just cleaned us out."

The driver and trucking company: Both negligent

The driver who caused the crash was reportedly arrested and charged with operating under the influence just weeks prior to the crash. That arrest occurred in a Walmart parking lot in East Windsor, Connecticut, after a complaint about a man revving his truck engine and causing a disturbance.

Moreover, he was placed on probation for one year and had his driver’s license suspended for 210 days in 2013 after being arrested for drunk driving.

Upon his arrest in Massachusetts, police found wax packets, believed to be containing heroin residue, in the driver’s possession.

According to federal records, Westfield Transport had a history of safety violations, including two incidents where drivers were in possession of narcotics – one of whom was driving the same vehicle involved in the deadly crash.

Other violations included defective brakes, drivers operating without a required CDL license, drivers failing to stay in a lane and traveling as much as 14 mph above the posted speed limit.

Unfortunately, we hear about tragedies like this all the time. The attorneys at Burns, Bryant, Cox, Rockefeller & Durkin, P.A. are dedicated to fighting for the rights of injured motorcyclists and helping families through devastating times such as these.

If you were injured in a motorcycle crash, the last thing you need to deal with is a negligent trucking company who will go to great lengths to cover up their wrongdoing, or a pushy insurance provider attempting to convince you to take a settlement offer. Let our experienced legal team do the work for you. Contact us today to find out how we can help.