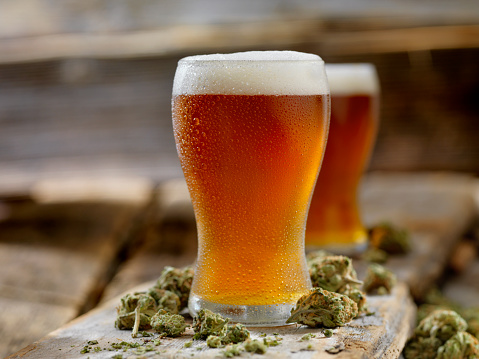 It's no secret that impaired driving is irresponsible and dangerous — over 50% of all car accidents are caused by drivers who operate under the influence of alcohol or drugs.

But what about drivers who drink alcohol and consume marijuana?

Unsurprisingly, a new study reveals that combining the two substances can be a dangerous mix.

According to a new report by the AAA Foundation for Traffic Safety, people who use both alcohol and marijuana are substantially more likely to engage in risky driving behaviors such as speeding, texting while driving, running red lights, and other moving violations that put everyone else on the road in danger.

As stated in the AAA Foundation's annual Traffic Safety Culture Index, those who drink alcohol but don't use cannabis aren't as likely to drive drunk compared to those who use both marijuana and alcohol.

The people interviewed in the survey identified as individuals who drank alcohol and used cannabis within the past 30 days, and some acknowledged that they used both alcohol and marijuana at the same time.

The study found that the people who used both marijuana and alcohol had way more dangerous driving habits than people who only drank alcohol and those who refrain from using either.

When compared to alcohol-only users, people who confessed to using both marijuana and alcohol were more likely to report they engaged in dangerous driving behaviors. To no one's surprise, drivers who don't drink alcohol or consume marijuana were significantly less likely to engage in risky driving habits.

Key findings from the survey include:

“These data show the alarming impact of alcohol and marijuana use on the choices drivers make when they get behind the wheel,” said Jake Nelson, AAA’s director of traffic safety advocacy and research. “From choosing to drive while impaired, and speeding, to driving distracted or running red lights, using these two drugs leads to poor decision-making with potentially fatal consequences.”

Substance-impaired driving is a problem

Over 139 million people ages 12 and up admitted to drinking alcohol within the past 30 days while 43.5 million said they consumed cannabis within the last year.

Without question, weed and alcohol are the two most widely used drugs in the U.S. — and as more states legalize marijuana for recreational use, there's a good chance it means you'll be sharing the road with an impaired driver, maybe even someone who is drunk and high.

Most people already know that drunk drivers are at a greater risk of causing a motor vehicle collision, but research has also shown the driving high doubles your chances of being involved in a crash.

In Florida, prosecutors say a 16-year-old Miami teen was drunk and high when he crashed into a car that turned in front of him, killing four people.

Meanwhile in Texas, a 32-year-old South Dallas man who had been drinking tequila and was in possession of marijuana is facing charges after he hit and killed a Dallas police officer directing traffic around an accident on the highway.

Not only were these two tragedies senseless, but they were also each preventable.

If you were injured or a loved one died in a crash caused by an impaired driver in New Hampshire, you have the legal right to seek compensation from the at-fault party to cover the cost of all your accident-related expenses, including but not limited to:

Whatever you do, don't let the insurance company dictate the outcome of your claim. Insurance adjusters are famous for delaying, disputing, or simply denying injury claims, even if they have merit. If an insurance company does make you a settlement offer, keep in mind that they have a vested interest in paying you as little money as possible. As such, you can expect their offer to be much less than what you're actually entitled to recover.

At Burns, Bryant, Cox, Rockefeller & Durkin, P.A., our car accident lawyers have been standing up for clients in New Hampshire for over 150 years. Let us maximize the value of your claim and fight for every dollar you deserve so we can send a strong message to others that their reckless actions won't be tolerated.

Discover how our knowledgeable and experienced legal team can help you. Contact us today for a free consultation. We have offices in Dover and Portsmouth, and we proudly represent clients throughout New Hampshire.