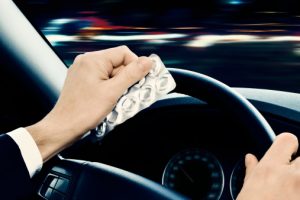 In recent years, the growing opioid epidemic has received significant media attention in New Hampshire and nationwide. It's a growing public health crisis, and not just because of the health risks associated with opioid use in and of itself. Driving under the influence of opioids is also extremely dangerous and has been linked to a growing number of fatal crashes. The more people that use, the more that may be behind the wheel later.

CBS News recently reported on a massive spike in opioid-related crash fatalities, which have increased by a factor of seven over the last two decades. (New Hampshire is one of six states that routinely test for drugs in the systems of people who have died in car crashes and contributed information to the study cited in the CBS report.) That's consistent with the overall nationwide increase in opioid use, according to the CBS story.

And a recent incident here in New Hampshire drives home the dangers of opioid use among motorists. In early October, a Manchester man was arrested after he caused a three-vehicle accident while driving under the influence of narcotics - with a one-year-old child in the back seat. Fortunately, no one was injured in this crash.

Opioid use significantly increases the risk of dangerous crashes

Even more dangerously, opioid use can cause drivers to become drowsy behind the wheel. When motorists fall asleep at the wheel, whether due to drug use, fatigue or otherwise, they often cause deadly head-on collisions and other serious crashes. And many drowsy or otherwise impaired drivers may not even hit the brakes before impact, which causes crashes to happen at full speed.

These drugs represent a unique challenge for drivers and law enforcement

While most states, including New Hampshire, have laws against driving under the influence of narcotics and similar substances, enforcing those laws can be difficult.

And many motorists may be unaware of the dangers that prescription opioids can pose. Doctors and other medical professionals need to do a better job of warning their patients that they should not drive while under the influence of prescription painkillers, especially when they are just starting a new medication and may be unfamiliar with the effects.

Even more importantly, motorists in New Hampshire and nationwide need to take responsibility and make sure they do not get behind the wheel while they are not safe to drive, whether due to opioids, alcohol, or any other factor. And when impaired drivers cause serious crashes, they need to be held accountable.