"I would recommend this firm for any legal issue."
-C.S.

Attorney Paul Richard Cox has been in practice since the 1960s, giving him an edge of experience in the courtroom. He knows the ins and outs of the legal system, and he has the honors and awards to prove it. Attorney Paul Richard Cox has dedicated his legal career to helping those who feel helpless, recovering substantial settlements for victims and those in need of legal aid.

At Burns, Bryant, Cox, Rockefeller & Durkin, P.A., every case is treated like a personal matter to us. You may be just a client to other attorneys. To us, you are family. Contact us to schedule your consultation with one of our attorneys.

Numerous significant verdicts and settlements, a small sampling of which are:

Dumas v. State Farm, 111 N. H. 43 ('71) After obtaining verdict for plaintiff in excess of insurance policy held by defendant, suit was brought and won against State Farm for the entire amount of the verdict, plus interest and costs, due to State Farm Insurance Company's negligence in handling the claim, including its failure to settle. All verdicts were upheld on Appeal and the case stands as an important landmark relative to the rights of the claimant and the insured against careless insurance companies. 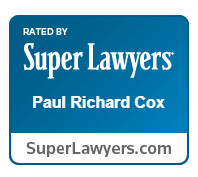