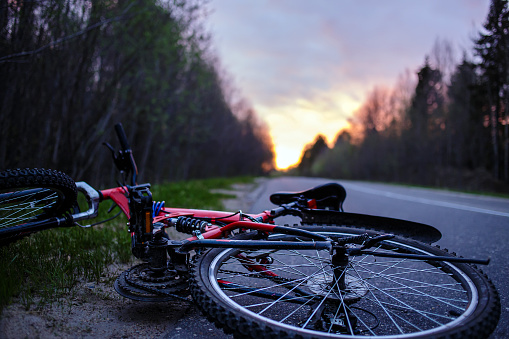 The New Hampshire law enforcement community suffered a tragic loss on Sept. 21, 2021, when a retired Hudson police sergeant was struck and killed as she rode her bicycle in Kingston. Adding to the tragedy, the driver who allegedly killed the 59-year-old retired police sergeant fled the scene, leaving her on the side of Route 125 near New Boston Road. She had been in training for a charity bicycle ride.

By week's end – Sept. 24 – police had a suspect in custody. The 45-year-old man was arrested at a Portsmouth motel and charged with negligent homicide. He also was charged with conduct after an accident. Police tracked down the suspect after releasing images of his vehicle, a 2005 GMC Yukon, to the public that had been captured on video.

“That’s obviously great news, but it doesn’t bring back my friend and colleague who I worked with for 20-plus years,” said Hudson Police Chief William Avery, adding: “She was a great person and a good friend of mine.”

In addition, the suspect's wife was charged with hindering apprehension.

Bicyclists have a right to use the road

Riding a bicycle is a fantastic way to get around in New Hampshire, but far too many drivers don't think they need to share the road with cyclists. Sadly, all it takes is one negligent driver to cause a devastating bicycle accident that results in severe injury or death.

According to the National Highway Traffic Safety Administration (NHTSA), drivers can do their part to keep bicyclists safe by following these tips:

Cyclists are presented with much different safety challenges than motorists because they are much smaller and have virtually zero protection in the event of a collision when compared to passengers inside an enclosed vehicle that has safety features such as seatbelts and airbags.

As such, it's the responsibility of every motorist to keep alert, stay attentive, and share the road with bicyclists.

Unfortunately, a lot of drivers ignore that responsibility, resulting in:

Anyone who gets hit by a car is at risk of suffering severe and potentially permanent injuries. Even when wearing a helmet and other protective equipment, it's common for bicyclists to suffer life-altering injuries such as:

If you were hit by a car and suffered injuries, you have recourse under New Hampshire law, and a personal injury attorney can help you get a clear understanding of your legal rights and options.

Know your rights when you've been injured

Unfortunately, there is only so much you can do to protect yourself when riding your bicycle. No matter how safe you are, you remain largely at the mercy of motorists, which means all it takes is one negligent driver for you to get hit by a car. If you were hit by a car while riding a bicycle, it's likely you've suffered major injuries. If your family has lost someone in an accident, the pain and suffering can be immeasurably worse.

Fortunately, you don’t have to go down this road alone. When you have our law firm on your side, we can handle every aspect of your claim and aggressively advocate for your best interests while we fight for the compensation you need and deserve.

For more than 150 years, our attorneys have been proudly serving injury victims throughout New Hampshire. Founded in 1870, our law firm takes pride in making reckless drivers answer for their negligence.

Find out how an experienced New Hampshire bicycle accident lawyer can help you and contact us today for a free consultation. Our offices are located in Dover and Portsmouth, and we would be honored to talk to you about your potential legal case.